It is with great sadness that we heard of the death of Henry Worsley in his valiant attempt to cross Antartica completely unaided.  http://www.bbc.co.uk/news/uk-35398552

We supplied Dorset Flapjacks to Henry and his team when they re-enacted the centenary of the Race to the South Pole between Amundsen and Scott in 2011.  (See the blog further below).  I met him a couple of times at events in London and Henry very generously offered to come to meet our staff in our bakery, but we decided that it would be better if he could give a talk at our Local British Legion so that we could raise more funds for his cause being the Battle Back Centre for the rehabilitation of injured services personnel.

I invited him to have dinner with the family before hand and after a quick tour of the bakery we sat down to our meal.  Henry regaled us with stories of the Antarctic yet showed a genuine interest in our family and our business.  It would not be possible to have had a more enchanting guest at the dinner table.

80 people filled our British Legion and as Henry started to speak there was a mood of anticipation.  2 hours later there was a spellbound and excited silence as he retold the epic story of Amundsen and Scott’s two different attempts to reach the South Pole first.  He wove his personal experiences and photographs into the stories and his love of the white continent was plain for all to see.  Although we all knew the end of the stories we were gripped in the telling and there was a sad finish as we got to the death of Oates, Scott and the remaining team.  It was in a later discussion I realised that his true hero was Shackleton who could have been first to the South Pole but turned back to save his men from a certain death despite being so close to the glory.

The crowd did not want him to stop and Henry answered questions from the floor for at least an hour.  It was a night that everyone who was there will remember very fondly. A couple of weeks later he was back ‘at work’ in Afghanistan.

His is a great loss to mankind but from that one evening with him I get the feeling that his fascination for exploring and the Antarctic was such that he at least died doing something that he truly loved to do. 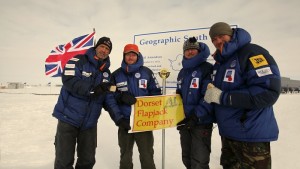